The Kill Bill mv has been released and it is primarily what it says on the tin. 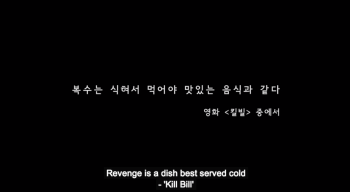 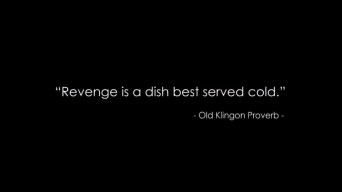 B.E.G. cite their source as the movie, Tarantino’s original source for the theme of revenge is 1982 Star Trek movie The Wrath of Khan. When the Reliant is heading directly at the Enterprise Kahn says:

Ah, Kirk, my old friend, do you know the Klingon proverb that tells us revenge is a dish that is best served cold?

We then hear their remake of Nancy Sinatra’s Bang Bang, the music that is used over the title sequence in the original movie. 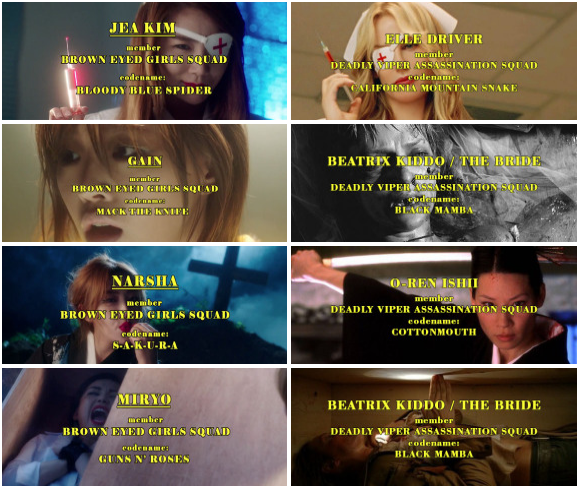 We see Miryo’s title card laid over a recreation of one of The Bride’s scenes from Kill Bill Vol2, even though Ga In has already been established as The Bride, this is more than likely because the fourth assassin in Kill Bill is Vernita Green, aka Copperhead. When The Bride catches up with her she is living under a false name as a homemaker and is no longer an assassin. She doesn’t make for the same action the other three of Bill’s assassins do!

Aptly the title cards are written in yellow. Yellow is a common Tarantino title colour theme, appearing in almost every title sequence he has created.

The flaw in B.E.G.’s Kill Bill is that Ga In’s final goal doesn’t appear to be to kill Bill, there isn’t even a Bill. I won’t spoil the ending of the mv for you, but lets just says it’s quite different to Tarantino’s Kill Bill. Not a bad thing, but I wouldn’t say this mv’s ending is necessarily good either.

Kill Bill’s choreography is interesting to say the least, I doubt it will stay the same for music shows. What will be great to see is the girls’ performance outfits for this song, I wonder if they’ll take any of the sexed-up gunslinger styles out onto the weekly music shows with them. Rather those outfits than the Kill Bill character costumes anyway!

Check out this ode to the Hollywood filmmaker from the Brown Eyed Girls, its an interesting take on the characters from the two part feature and might have you re-watching Kill Bill as you remember all the references!