Epik High are set to release their album Shoebox on Tuesday, and their pre-release track comes in the form of Born Hater. The track features Beenzino; Verbal Jint; Winner’s Mino; and YG iKON rookies B.I and Bobby.

Alongside lyrics that hit back at the haters wasting their own time, Born Hater is filled with numerous visual meanings and messages, from the simple visual of the hated being where they belong, to explanations of personality, and more in depth themes.

First up is DJ Tukutz. Often the ‘forgotten’ member of Epik High, Tukutz visually stands out, though his attention is almost solely to his role as DJ, the reason he is often lost in the background.

Though, there is more to each image than describing personality, each member is a symbol of a deadly sin. DJ Tukutz represents envy, as the one often hidden in the background or forgotten he is envious of the others.

Next up is Epik High’s front man, Tablo. Tablo is surrounded by portraits of, or the works of ‘genius’ artists, such as Picasso, and William Shakespeare. Tablo is undoubtably the artist appearing on this track with the most haters, and much like his fellow artistic geniuses, his opposition is harsh, he is no better than a much hated pest.

Tablo is the original sin – Pride. He puts himself amongst, even above the worlds geniuses, showing a sense of self importance, mirroring his haters opinion that he exaggerated his own achievements to inconceivable proportions, and the haters own idea that their opinion is superior.
This is also seen once more later in the mv, as Mithra is in darkness and Tablo poses to camera, he becomes the most important Epik High member – and as their frontman he is, essentially, the most focussed upon member in the media. 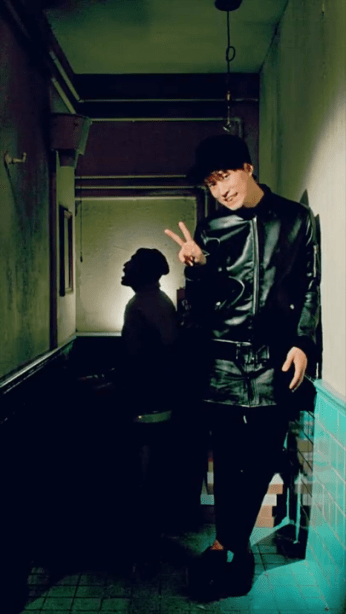 Then, we are presented with the featuring artists. First up to bat: Beenzino. Beenzino is hot property in the Korean rap world. As a link to Epik High’s album title Beenzino’s shots are filled with shoeboxes, the rapper notably has his own track called Nike Shoes. Maybe most interestingly, he hold an Adidas athletic trainer in his hand whilst surrounded by Nike boxes.

Beenzino is sloth, he sits unanimated, even with company, and passes his time fishing. 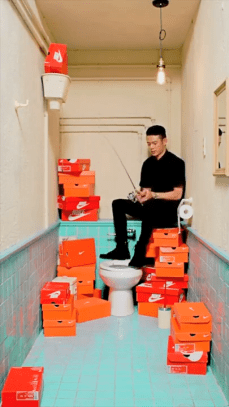 The next feature comes from King of Flow, Verbal Jint. Like Tablo, Verbal Jint is known for being an intelligent rapper, and scholar; having a degree in economics and having been accepted to read law at SNU. VJ however went into the music industry and became one of the key players in changing Korean rap. He is still looked up to as a father of Korean rap, and is one of the few rappers willing to lend his voice to anyone in Korean music he values, young or old, pop or hip hop.
Surrounding VJ are many books incorporating many topics his own fans will associate with him: educational material, comic books, and the more prominent visual: mens’ lifestyle magazines (that’s seemingly the technical term for material such as Maxim).
Verbal Jint represents lust. A topic he recently explored in his own Rare Breed mv, the idea of Verbal Jint reading such materials isn’t new or shocking. Juniors in his company have been known to adapt his real name [Jintae] into the Korean for pervert [Byuntae].
Within his representation of lust, his image as a teacher isn’t lost, though here its used through sharing his mens’ lifestyle magazine collection with B.I. Epik High rapper Mithra’s representation of sin is possibly self explanatory. Mithra is gluttony, over indulgence. This representation also has obvious roots in Mithra’s own image. To comeback with Epik High in 2012 he lost an impressive amount of weight. Previously one of the most often mentioned topics in relation to the rapper had unfortunately been his weight, though frankly no where near excessive, Mithra was noticeably larger than his two fellow group members.

Now to the YG Rookies. Mino of WINNER was formerly a trainee at BrandNew Stardom (back when BrandNew Music and Stardom Entertainment coexisted). He was in the final lineup for Stardom group Block B, though left at the last minute. Before moving to YG he debuted as a rapper in a ballad group. Mino references this in his Born Hater rap.
Mino is wrath, or rage. He is letting his anger out regarding the hatred he received, though he is proving that he made it to where he is through his own strength and skill. 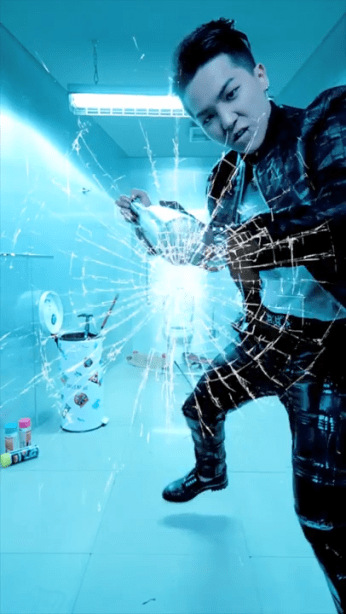 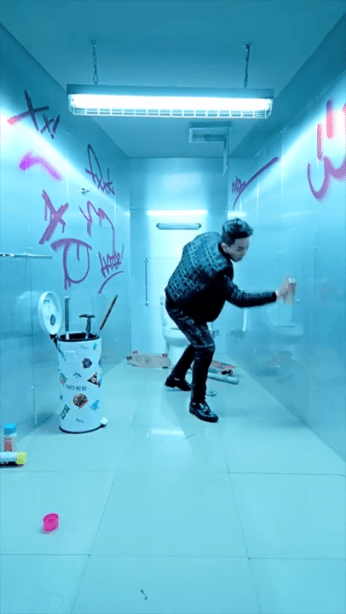 Bobby is greed. As the winner of Show Me The Money 3 he received 100 million KRW, a sum of money he was allowed to keep in its entirety, YG not taking a cut, despite him still being an apprentice.
Bobby throws around his excesses of money in his gaudily decorated set, showing off his wealth and portrayed greed. This also links well to his SMTM3 mentors, Dok2 & The Quiett. Rapper from Illionaire, the company’s name and image is that of being rich, in cool and worth. 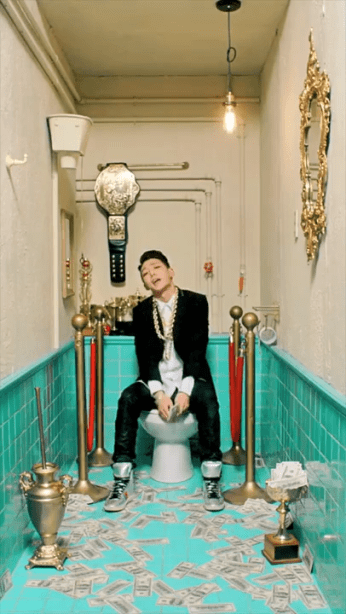 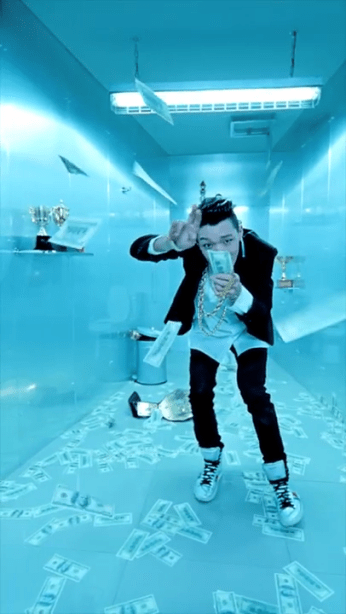 Last is B.I, though appearing on SMTM3 under the mentoring of YG’s Tablo and Masta Wu, B.I is still the least experienced artist to feature on this track. He even uses a quote from Masta Wu in his lyrics ‘That’s no no!‘
B.I is pure, white, a blank slate, in this mv, wishing to learn and take in the experience of the others. Much of the hate B.I received during his time on SMTM3 was due to his apparent want to please Tablo and Masta Wu, rather than step out of his comfort zone and show off his skills.

The Shoebox album’s main theme is fate. B.I cannot, cleanse them of their sins as the rappers know that haters are their fate, a fate that cannot be changed. They claim to be past saving, though they are embracing their fate, their path in life, and they believe in themselves. B.I’s purity means he hasn’t learnt this yet, there is hope that he won’t have to, though already his path looks set.

The ending of the video in which B.I reaches out to touch Tukutz’ mixer and is reprimanded for it is both reflective of B.I exploring his talent but also having boundaries; and also of the artists hitting back at those who hate and interfere. 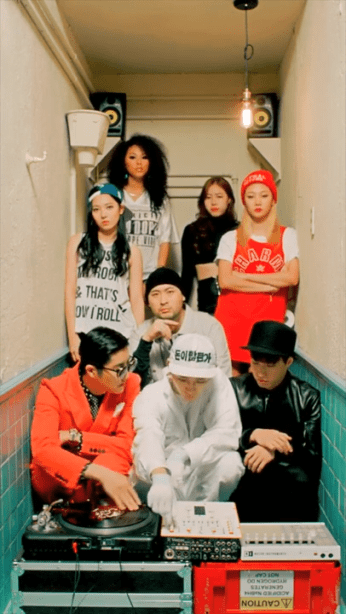 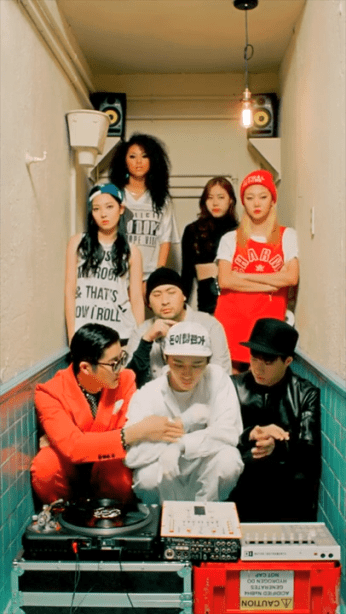 The track captures the essence of Korean rap, and Epik High well with its truth spilling lyrics, and unique, in depth mv.