The ninth annual Sound City festival took place in Liverpool over Bank Holiday weekend, and we were there to catch this years showcase of Korean talent. Six acts from South Korea’s indie scene attended the festival this year to deliver a host of impressive, and unique sets.

Here is all you need to know about their Sound City performances.

Dead Buttons took to the Atlantic Stage, Sound City’s main stage, at 1pm on Saturday. As the festival hadn’t long since kicked off the site was still reasonably quiet but this didn’t stop Dead Buttons delivering an impressive set. This was the third time I had seen the duo on this tour and it was the most impressive. The crowd grew as they made their way through a half hour set to a rather reasonable size for a relatively unknown group playing a festival main stage.

The only downside to a festival main stage spot for this duo was the vast space it meant they had to occupy. Kwanghee is of course stationary as a drummer, and given his need for a microphone Jihyun rarely moves either, meaning they can look a little lost in the large performance area. Though they certainly make up for it through sound. Dead Buttons roared through a set that included favourites such as Witch, and new single Desire, true to fashion. There’s plenty of anti-love songs in the Buttons repertoire to match the rawness of guitarist Jihyun’s vocals.

Dead Buttons certainly set the tone for our festival weekend and we couldn’t wait to see even more of what Sound City had to offer. 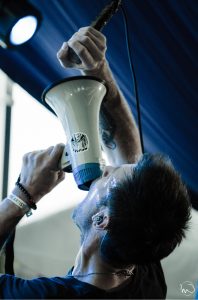 Another of our Saturday festival highlights was a performance by actor and screen-writer Paddy Considine’s band Riding the Low. [Dead Man’s Shoes, Peaky Blinders, Tyrannosaur]

A loud and fast-paced set in the Tim Peaks Diner tent saw Considine stick it to the man as he told festival staff that he ‘couldn’t do six minutes’ upon finding out the time his set had remaining. He declared he’d be singing two more songs and if they didn’t like it they could ‘fucking turn it off’, unsurprisingly no one did. The set felt like an ode to the inspirations of the band, and an insight into the mind of Considine, a mind that he admittedly says has suffered plenty.

Not even main stagers Sleaford Mods, or Catfish and the Bottlemen could capture our attention quite like Riding the Low – though their efforts were valiant, and we were pleasantly surprised by how much we loved Sleaford Mods.

Sunday evening saw the rest of the South Korean acts take to the Cargo Stage. Though a noticeably smaller stage to the Cavern Stage that hosted the showcase at Sound City 2015, being situated near one of the well trafficked bars, and the VIP area brought plenty a curious passerby to a standstill.

Electronic rockers We Are The Night were the first up and they started the showcase in perfect style. We Are The Night are an interesting band to watch, because there is so much going on during their performance. Even as Ham Byung Sun [Goosy] delivers his vocals it’s likely you’ll be watching one of the other members.
There isn’t one set instrument for each member with this group, as you’ll often see them switch between electronic and the more common ‘band’ instruments; and the range of sounds brings a depth to their music. The group combine the sounds of synthesisers, electronics, effects units such as the talk box with drums and guitars to produce very easy listening vibes.
We Are The Night felt like a fitting introduction to a showcase that could only up its intensity.

That is exactly what LayBricks did, taking the showcase to the next level. The guitar and drum duo have quickly become a favourite of mine, and it is not surprising. No matter how many times you hear this set (featuring songs from their Take A Rest EP) it never becomes tired. Kwangmin and Hyejin have an infectious energy that spreads through their music and out into the crowd. Kwangmin is not wrong when he says their music will fill you with energy and have you moving your feet.
Every song in their set has its own unique appeal, and whether it be the emotive tones of Moon, the sing-along-ability of Make You Silly, or the earworm addictiveness of Don’t Worry you’re bound to find a favourite.

Next to take to the stage was DTSQ. DTSQ feel a little left of field. To look at them you probably couldn’t put them into a genre box, and frankly it would be a hard job upon listening to them too. With all the rawness of punk rock, there’s also plenty of psychedelic undertones, and even influences of techno. What ever exact genre of niche rock these guys fit into though is a little beside the point – they’re great and that’s all one needs to know. Vocalist and guitarist Suhyun Kim seems to struggle to stand still – launching himself off the stage numerous times, and that’s all part of the fun with DTSQ. In one of the highlights of their set the trio played an homage to the city’s most famous band, The Beatles, with a cover of I Am The Walrus.

57 hit us with a wall of sound, just as they had at Superheroes of Korean Rock, and once again we were not disappointed. There is a power in the performance of 57 that doesn’t feel like it should be possible for just two people to produce. But with each song the duo continue to prove that train of thought wrong and up the ante.
By the final songs of their set vocalist Junhong was flying around the stage as he played guitar, and alongside the hair-whipping drumming of Seol you’d have been hard pushed to not be awed by their energy.

Then to PATiENTS. After two years seeing and covering this band we always wonder if there will come a day when we have nothing more to add about them, but this was not that day. PATiENTS drew in an impressive crowd, including many that had come across them somewhat accidentally the previous year – testament to their presence and talent.
It was interesting just to stand next to those who had become such fans of PATiENTS after their last Sound City set and hear the passion with which they spoke of their music before the set started – and given we’d seen the set at Superheroes of Korean Rock we knew that their appreciation could only grow.
Sumin of PATiENTS is the one frontman of the showcase who knows how to work an audience, and you can see him feed off the energy he creates through his showmanship as his performance continues (only Kwangmin of LayBricks could attest to a similar level of audience interaction).

Sumin is, without doubt, a perfect embodiment of the music of PATiENTS. With his electrified hair, and the crazy bursts of energy akin to one of those pull back and go toy cars as he scissor kicks and jumps around, he is a fitting advert for hybrid punk.
Hyuk Jang almost always has an air of cool about him, and his performance intensifies this. We were definitely excited to see another performance of Space Call Girl as Hyuk Jang steps out into his own spotlight, figuratively speaking, to leave you nothing short of awed. Soowon continued to impress us as the newest member of the group and given his skill and incredible presence we can’t wait to see more of this new lineup.

For us our Sound City favourites were PATiENTS; with LayBricks a very, very close second.

Our other Sunday highlights included one of the North Stage first acts of the day. Sky Valley Mistress showcased the talent of their female singer well, though one would have liked her interaction with the crowd to have as much impact as her performance.

Also on the North Stage, an early afternoon performance from Chinese rock band Miserable Faith impressed plenty. Fans were out in force, capturing the true festival spirit as they waved flags emblazoned with the logo of the group. Miserable Faith utilise plenty of out-of-the-box sounds to create their infectious strain of rock music, and certainly captured themselves a number of new fans.
Locals Red Rum Club took to the Cavern Stage on Sunday afternoon to deliver an emotive performance. The group have a single trumpet player amongst their staple rock set up, giving the music this group produces vibes of Tarantino and old western movies at times.
Former Libertines front man Peter Doherty was the final act to play the North Stage (possibly our favourite stage of the weekend). Doherty has only improved with time, and it is a pleasure to be able to see the true artist he has become.

Liverpool Sound City 2016 was an immense success, and we can’t wait to see what they have in store for their tenth year.