Requested by shinygoldsuits via tumblr submit, its time to visit another first generation kpop group, Shinhwa, and their 1999 track Yo! from their T.O.P album.

Twinkling Of Paradise was the 2nd studio album from Shinhwa, released through their original label, SM Entertainment.

Say ‘SMEnt music video’ to a Kpop fan now and you conjure images of the ‘SM Formula‘: large rooms; choreography; obscure clothing to add to their youthful image.
This wasn’t always the case. Even in the earlier days of the second generation groups there would be two editions of most music videos, both a choreography and drama edition.

Though for the first generation, who were creating the idol culture, when SM were at the top of the game having started the market with H.O.T., it was all about the drama.

The track was written and composed by Yoo Young Jin, a name most SM fans will be familiar with through his writing and vocal work with a multitude of their artists. 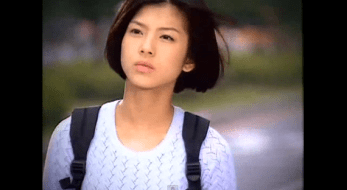 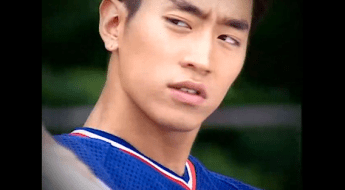 The boys face a gang that appear to be more established more intimidating and older than them. Minwoo comes away worse for wear, his lip split.

With a difficult home situation, Bomi also finds herself in the wrong place at the wrong time with Minwoo, becoming the victim of one of his rebellious acts.

The song has a theme of redemption, telling that there is a role in the world for ‘me’ [the rebel], something only ‘I’ can do. With the confidence you can do these things, you will see there is nothing more beautiful than overcoming the hardships.

In the narrative Minwoo finds Bomi’s diary in her bag. He learns of the troubles in her life and feels guilty for adding to her pain, and falls for her. He returns her school bag and spends time with her.

Meanwhile Eric has led many of his friends into a gang war against the group who faced off against Minwoo at the beginning.
In dramatic slow motion the gang leaders approach each other and we are looking out from Eric’s point of view as a metal pipe is swung at the camera.

Minwoo runs as fast as he can, as we see Eric in almighty pain, and the opposition gang’s leaders laughing about their win.
Minwoo attacks the group for what they have done to Eric, but there are too many of them for him to take on alone. Although the police intervene we are left not knowing Minwoo’s fate.

Through the video cutting to Eric in his hospital bed, and Bomi in the street, and the pain they feel as Minwoo lies on the floor, this implies a bond between the three and that they have possibly felt the pain of his death.

This is a fight with fate, Minwoo had his chance to break away from the path life was taking him towards and start again with Bomi, but in a fit of blind rage and loyalty to Eric his fate drew him back to his path and leads him to his ending, lying alone, beaten and bloodied.

Interesting little nuggets of info about Yo!:

It’s Dongwan you see dressed in the Visual Kei get up in the first few seconds and if you watch live performances you’ll see a mixture of their tanktop gang looks, yes Dongwan dresses exactly like this!

Listening to this track you might hear a word that causes much offence, that being in the line

Do you live for me? N*ggas, answer me!

This isn’t a case of miss-hearing ‘naega’ as people sometimes do with Korean tracks. Shinhwa actually did use this word in the English rap section, but they meant no offence by using the word, it was simply a case of using a word because of its mass use in the genre they were sampling. Eventually they changed it to ‘Please, answer me’.

If you’re an SMTown fan, or are recently getting into Shinhwa I’d certainly recommend looking at some of the older videos by this group. You’ll find some gems.