BIGBANG’s rapper T.O.P has returned to the world of solo rap with the track Doom Dada. It’s no secret that T.O.P is a man of weird and wonderful, artistic tastes, and Doom Dada couldn’t display those points in any better way.

We open the mv with T.O.P facing away from the camera, a throwback to his Turn It Up mv in which he opens in exactly the same way. In Turn It Up he stands in front of a large speaker, here in Doom Dada the speaker appears in his back. 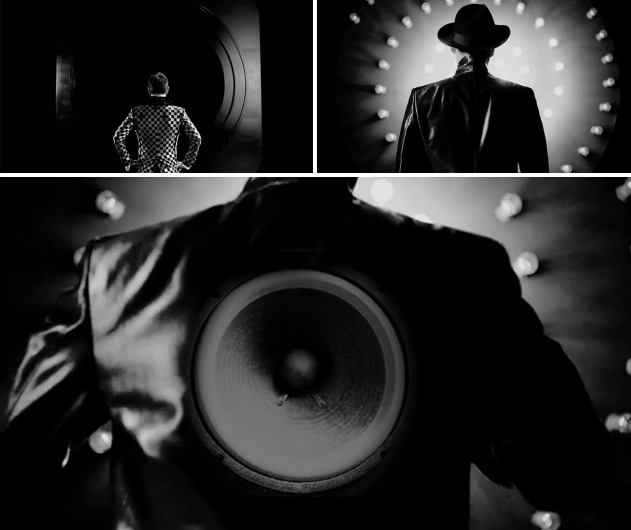 Switch to the rocky plain of the title card setting and we find a group of man-apes. These hominids are an ode to the Dawn of Man plot in 2001: A Space Odyssey. As in 2001: A Space Odyssey the hominids are within a rock crater, examining their surroundings. In the dirt they find a microphone. In the movie the man-apes learn to use bones as tools and weapons. Upon finding the microphone this symbolises that on evolution into man they will learn to be entertainers and rappers, and grow into the artists of the future. 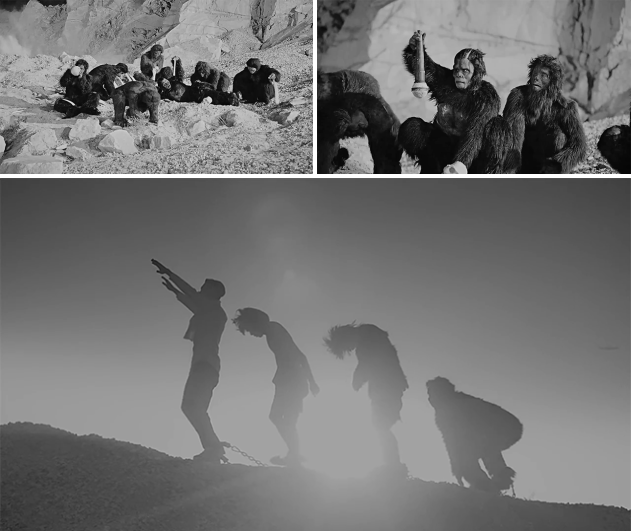 a 21st century, extraordinary Korean, A god-given rap Basquait with a mic

He has fully evolved, as shown by him leading the line of evolution, and now he is the artist of rap. T.O.P wears one of his eyes covered with a patch in the mv.
This could be a reference to any number of fictional characters, though given the styling of the rest of the mv and one other big plot point I’d wonder if this is a reference to the Knave of Hearts, Stayne, in the more modern adaption of Alice In Wonderland. 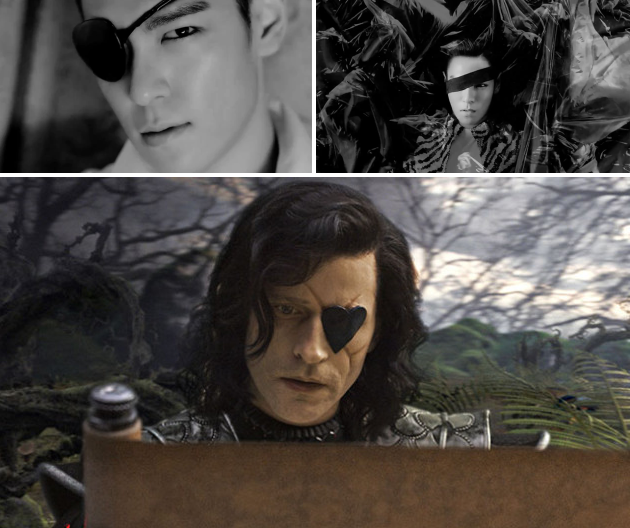 This point of wonder comes from a possible style reference for the giant baby that accompanies T.O.P throughout parts of the mv. It could be perceived that the baby has a resemblance to Tweedledum and Tweedledee, characters from Lewis Carroll’s Through The Looking Glass, but particularly, their representation in the modern adaption of the Alice In Wonderland tale. Lewis Carroll was considered a writer of ‘literary nonsense’, a genre that would fit well with the other major influence for the mv. As an interesting point, Seungri used Lewis Carroll as inspiration for his V.V.I.P. concept.

Staying with the baby, brings us to the other influence nicely, though there are many other links to him that can and will be covered. The giant baby, however – Salvador Dali. It is known that T.O.P is a big fan of the artist and this mv shows that in a number of scenes.

With the baby the link is the artist’s painting Baby Map Of The World, featuring a giant baby’s head as a globe. 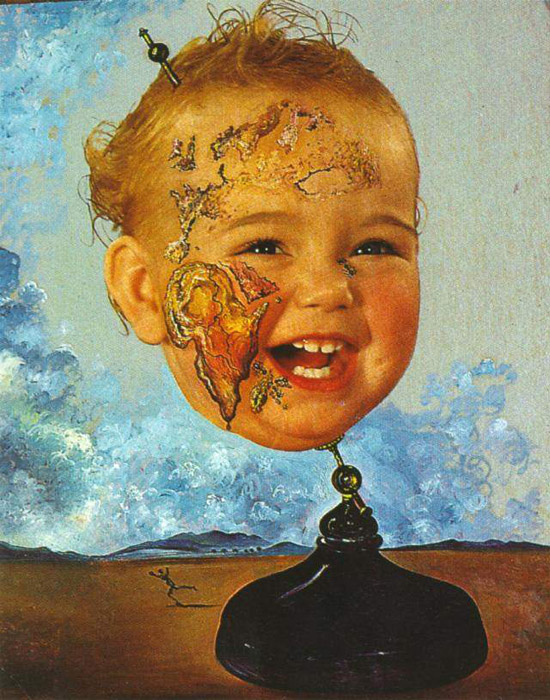 In short the painting is about children being the future of the world, and a link to this painting reflects T.O.P’s lyrics a new world, new inspiration, a young rap artist changing the scene with his art like rap.

Salvador Dali references appear numerous times in the mv, obviously, with clear references such as T.O.P’s ode to his appearance with his upturned moustache a-la the eccentric artist.

Elements such as the frequent rocky, desert-like setting reflect the frequent use of the desert in Dali artworks. Dali owned a Honda motorcycle, and included a motorcycle in his 1960 film Chaos & Creation – this one being another apt link back to the Dawn of Man scene, and the BIGBANG creation of the world, name of T.O.P’s group double meaning.

A very prominent image is the atomic explosion in the mv. 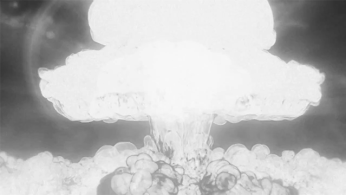 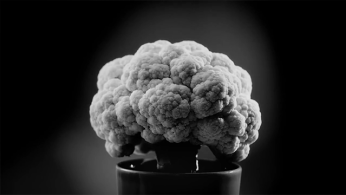 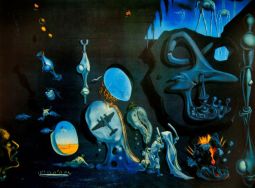 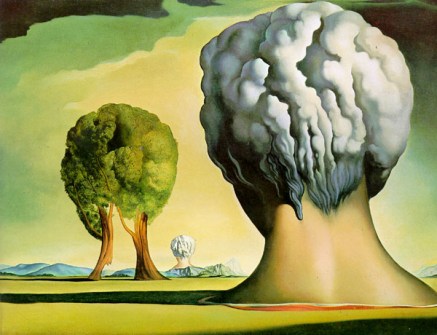 Dali often expressed his terror about the A-bombs dropped on Japan, and painted Melancholy Atomic and Uranium Idyll and The Three Sphinxes of Bikini about the events. They’re on display in Fukushima at Morohashi Museum of Modern Art.

The image of the atomic mushroom cloud comes alongside lyrics of how people who are ‘all talk’ and the overheated media put pressure on artists and push them to their limits. This is followed by the line

Most will know the phrase from The Lion King, and though it is known internationally through Disney their lyrics to Timon & Pumbaa’s well known song explain the meaning of the Swahili phrase easily and perfectly.

Hakuna Matata means ‘no worries’, T.O.P says those who are all talk, simply are that, so ‘no worries’ don’t get stressed about it and carry on doing what you do. Moving to one of the more implicit Dali links, but a very visually striking one, we have the scene in which the filming is fast and fevered. 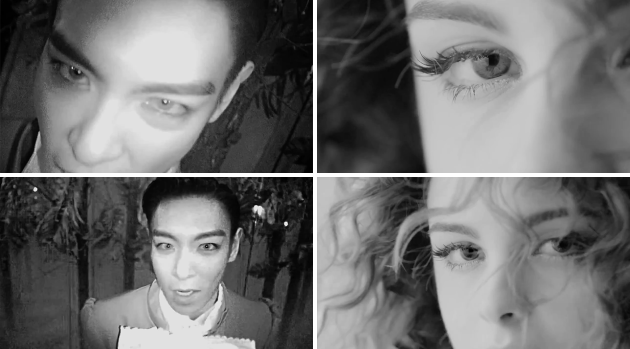 There is a famous Dali quote in which he said

Don’t do drugs, I am drugs

The visual style on the mv gives the feeling that the mv itself has has a hallucinogen effect. We even see the pupils of the female female in the shot dilate as if she has taken drugs. This visual effect takes us to the art effects that are also made to trick the eye, but not influenced by Dali.
The skeleton we see features two photographic techniques. It shoes ones of the earliest forms of slow motion photography that was used to capture and study movement. This was something Eadweard Muybridge developed, a big fan of photography T.O.P may be aware of Mubridge’s famous sets of motion capture photographs.
The shot goes on to show T.O.P running alongside the skeleton as it flicks past the screen in the style of a Zoetrope. A zoetrope would be a series of slightly different still images set up in a circle, you would look through a cut gap and as you spun the Zoetrope the images would appear to move because of the slight difference in each image around the circle.

The zebra we see, isn’t just an oddity added it to show just how unusual T.O.P is. The zebra is considered a natural creator of an optical illusion, a herd can fool predators with their strips. This optical illusion is seen as art within nature.

The zebra in Doom Dada isn’t a zebra however, it is a horse, painted to represent a zebra. Even if the stripes were 100% convincing you’d be able to tell the difference through the mane and tail of the related animals. 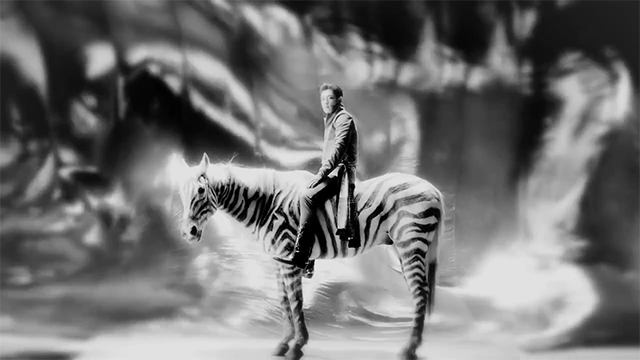 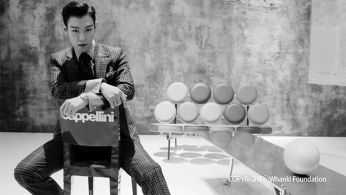 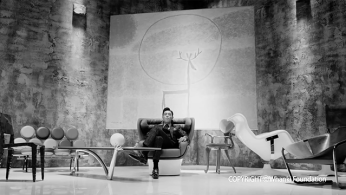 T.O.P’s addition to the BIGBANG solo releases is a visual delight and sounds just as great. This is one to take a look at if you haven’t already.