BIGBANG member Taeyang returned to the solo scene with his track Ringa Linga, written and produced by leader G Dragon.

END_OF_DOCUMENT_TOKEN_TO_BE_REPLACED

G Dragon’s latest music video was made by both YG and the recordings of 1000 of his fans, and is a unique peek into the celebrity of G Dragon.

END_OF_DOCUMENT_TOKEN_TO_BE_REPLACED

BIGBANG’s G Dragon and Seungri are both coming back with solo albums, and YGFamily have presented them with very different but equally impressive album teasers.

END_OF_DOCUMENT_TOKEN_TO_BE_REPLACED

In 2010 Kang Seung Yoon came fourth in Superstar K3, and in January 2011 signed as a trainee at YG Entertainment. Now in 2013 he has debuted with WILD AND YOUNG.

END_OF_DOCUMENT_TOKEN_TO_BE_REPLACED

I included two G Dragon mvs in my Noteworthy Concepts of 2012 series, though the post lacked detail for one of the mv concepts. Over on the tumblr version of this blog I’ve had a request to explain the concept for this mv so here it is – GD’s That XX.

END_OF_DOCUMENT_TOKEN_TO_BE_REPLACED

San E has returned, this time signed to one of my favourite companies Brand New Music, and his first track comes in the form of Rap Circus.

END_OF_DOCUMENT_TOKEN_TO_BE_REPLACED

G Dragon has revealed the mv for his LINE exclusive single MichiGO.

The mv embodies everything the song, and GD’s more recent styling, is about. The crazy and eclectic world of G Dragon.
MichiGO is about going crazy and the mv displays this through multiple G Dragon personalities.

G Dragon does have another personality in the mv, one that isn’t crazy, and one that presents a thought provoking question. That is the ‘geeky’ ordinary G Dragon that enters the train. Why does he have such huge feet?

Of course I don’t know for sure but here’s my thoughts on this character of G Dragon’s within the mv. 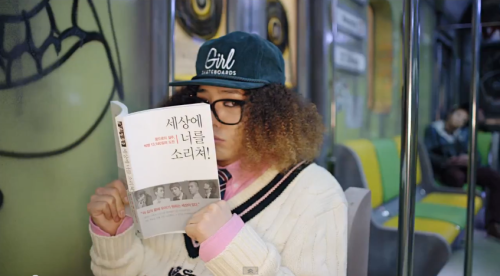 Once he’s on the train we see him reading a book, this book is in fact BigBang: Shouting Out To The World! and is a collection of memoirs written by BigBang and released in 2009 about how their journey to achieve their dream, and how others should keep striving for their goals.

If I understand correctly there is an old Korean saying, that I’m sure I will now badly explain, about how common people live because of their feet. Their feet are their driving force to progression as they must work for everything they have and anything they are due to get.
The established however, they live thanks to writing, the stories and sensationalism surrounding them. Everything they have and are due to get comes to them with ease because their names are known.

The image of G Dragon with his emphasised feet reading about how the now sensationalised G Dragon had to work incredibly hard for his fame brings to mind the story about how the common live because of their feet.

GD is an artist who talks about how much work he puts in to his music. He’s also spoken very openly about how there was a time when he did lose his head and how he now tries very hard to keep grounded.

Again, I have no inside knowledge of the YG thinking behind this mv, but the huge feet on this particular character would sit beautifully with the idea that they are a reminder that amongst the crazy, eccentric world G Dragon presents to his fans he is still the grounded, hard working Kwon Jiyong from the beginning.

If you discard all the deeper thoughts on the characters large feet and go for the obvious: G Dragon’s mv has obvious visual humour based around male anatomy references. And well ‘you know what they say about big feet’. Still – I personally like the deeper connection these images could have when considered in relation to the book.

It’s bright, fun, wild – everything you’d expect from this track!

Submitted by radsam via Tumblr

‘you got me really curious the other day about this one! Especially about the whole apple thing’