Korea is still very conservative, and the import of Western religious beliefs hasn’t at all helped this. Homophobia is common, and hearing it from a Korean one should understand it’s a belief many are brought up with. You don’t have to agree with it, and you can question it, but you can’t necessarily change it.

Therefore, being a native Korean, and a devout Christian, it maybe shouldn’t be much of a surprise that someone like Choi Siwon of Super Junior is homophobic. But is he right to share this opinion so openly?

Choi Siwon is a role model for millions of young people, making him something of a voice of his generation. Therefore he should be using that position wisely.
No matter the beliefs Siwon holds personally, given the status he holds he must consider the impact of his words more carefully.

By all means read this article to fully understand an extreme religious viewpoint on ‘so-called same-sex marriage’.

If you’re not from America you might not be fully versed in what Obergefell is. James Obergefell filed the United States Supreme Court case which ultimately led to the legalisation of same-sex marriage within all states of America, overturning the unconstitutional state-level bans.
The case saw same-sex marriage proved to be a guaranteed fundamental right in both the Due Process Clause and the Equal Protection Clause within the Fourteenth Amendment to the United States Constitution.

Recently a Kentucky County clerk was jailed for refusing to issue same-sex marriage licenses, Kim Davis citied her religion as reason. Hence those of similar religious belief declaring their support for her actions, and objection to the Supreme Court ruling.

Siwon isn’t American, of course, and there is no such laws in South Korea. [Wikipedia has an easy to read list of LGBT rights in South Korea]. So why does he need to make comment, even if it is through retweet?
For one reason. Because religion, in Siwon’s case, blinds his rationality and intelligence, and it is a regular occurrence.

When discussing his acting career and asked about being offered a sexually ambiguous role, he replied:

I will respectfully refuse any such offers. While I respect all genders, I do not wish to acknowledge homosexuals as I have been taught that God created Man and Woman with specific characteristics and duties. I realize that with globalization, there are many [entertainers] who do not share my views. There are those who are value-oriented and those who are success-oriented. However shouldn’t an actor deliver an image to his audience through roles he chooses to portray, based on his beliefs in life?

If you’ve ever spoken with me about Siwon you’ll have heard the word hypocrite, and this is an example of that.
While I respect all genders stinks of the same discriminatory sentence opener as I’m not racist but.

Cha Seung Won is a devout Roman Catholic, married with children and unquestionably masculine, but his performance Detective Ji Wook and his identification as transgender in High Heel was convincing and moving. This delivers the image of a skilled actor, not a question of his values or own sexuality. Being an actor gives you the chance to play something you are not with conviction. 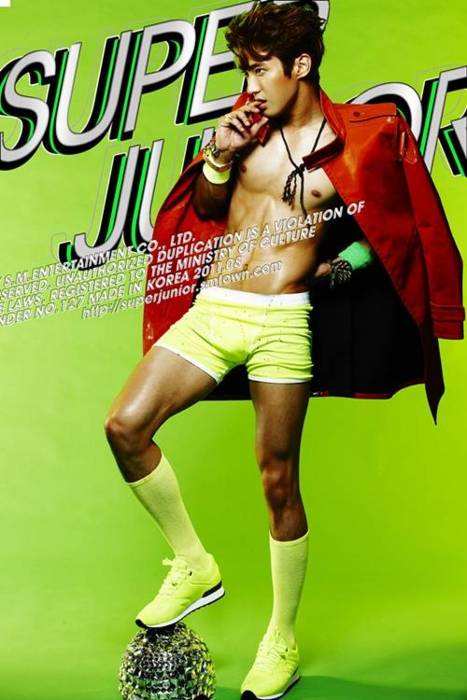 Plus, if you’re going to hold such bigoted opinions, don’t be a hypocrite. Let’s look at Super Junior for a moment. How many times have we seen Heechul and Siwon kiss?
There’s much question about Heechul’s sexuality [a question no one has the right to ask], but hypothetically were he bisexual or gay isn’t Siwon disrespecting a friend by saying he doesn’t acknowledge homosexuals?

And let us not forget that beautifully homoerotic teaser photo from Mr Simple [left].
Doesn’t kissing Heechul, and dressing in an outfit befitting of a Mardi Gras or Pride Festival float, go against delivering and image ‘based on his beliefs in life’?

Pick a belief and stick to it, but don’t push it on others, don’t offend others with it, don’t discriminate with it.
Siwon might be Korean, he might have been brought up with the openly bigoted views of his father, but as a celebrity known across the globe there is no room for anything but acceptance.

The extreme views of Christianity may not be causing war as other religions are, but they’re still oppressive, so why should we accept a celebrity standing up in support?