I had no idea what to expect the first time we encountered Tirikilatops, and wasn’t at all sure whether their band description [above] helped. Though, two performances, and hours of chat with the group later and we think we possibly understand them a little better.

The description of their music is, even if weird, strangely accurate. It is hard to compare Tirikilatops to anyone, in fact you might be hard pushed to pull out their inspirations from their sound – something that feels rare of late. Their use of electronica, combined with addictive and repetitive beats and lyrics is skilled. These are tracks that will stay with you, definite earworms. I caught the group for the second time at St Annes Kite Festival on the beach (the band currently reside on the Fylde Coast), a gig they tell me is strange for them – but it is part of BBC introducing… and is certainly extending their reach and audience. This particular beach set seems to be a winner amongst the children around, and it seems obvious why. They already have a dedicated fanbase, and despite joking they are all their friends this is untrue. “We are for everyone, just have fun!”

Tirikilatops are unrecognisable in their ‘usual human disguises’, but that is all a part of the fun. There is a mystery, and a magic, to the group that I find myself not wanting to break; yet they are a band that you instantly need to know more about.

Bom Carrot, Super Bodreong and Kangcoo are at first a visual shock. [Members will be referred to as Bom, SB, and Kang from here on] The groups costumes appear a haphazard collection of colour, arts and craft materials, and costume jewellery. Bom sports a dolphin-adorned snap bracelet on one wrist, something I’m sure I owned myself as a child in the early nineties. They’re not entirely sure what spurred them to dress up on stage, almost everything about Tirikilatops is a “happy accident”. Though they can tell you where most of the basis for the costumes comes from.

Bom, who grew up in the countryside about an hour outside of Seoul, inherited the colourful wardrobe from her late grandmother. “My grandmother loved colourful clothes.” Keeping the spirit of her colourful grandmother alive Bom saved the clothes from their inevitable, sad end and created something new. It isn’t just Bom that is wearing the clothes of her relative either, “Today I was wearing her grandmother’s old trousers” SB tells me. Bom is a collector of the weird and wonderful, believing “Old things have stories”, and telling stories, I quickly realise, is a large part of Tirikilatops.

There is one very noticeable part of their visual you cannot help but question, and that is Kangcoo. 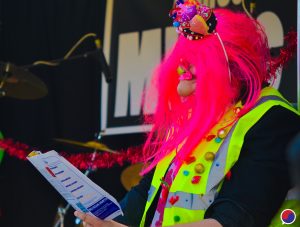 Kang sits to one side of the stage, reading – he was engrossed in The Big Issue during their last performance. He never sings, never plays an instrument, and only moves to turn a page, or throw a glance in the direction of Bom and SB. Its something I needed an answer to. Again, Kang seemed to just happen naturally, but he provides a balance to their out-of-this-world vibes. “Sometimes we fly away to the sky … He ties us together, and keeps us on earth,” Bom explains as she mimes tying a rope around them and anchoring them to the ground.
But Kang has another theory. “I am the band. They are the support act.” Its an opinion that causes much laughter and joking amongst Tirikilatops and their friends, but it is hard to deny that Kangcoo’s presence on stage is a big talking point. 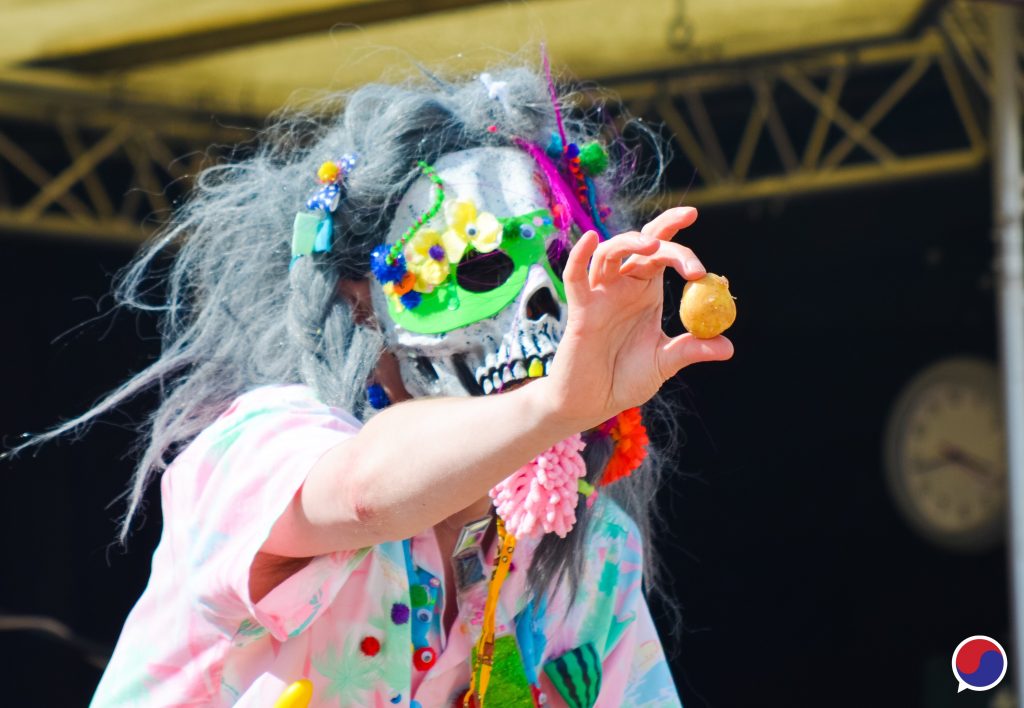 Like their visual, their lyrics can too seem a little odd. Bom openly explains that their lyrics aren’t written using grammatically correct English, they’re just written in the same way she speaks, but in reality her English is smoother.
Even though they appear odd, tracks such as Spy Dolphin, Snail Party, and Magic Formula were born of everyday observations, and conversations between the group.
Magic Formula is the end product of watching a seagull stamp its feel upon the rain soaked ground and learning that birds do this to draw worms to the surface “like a magic formula”.
For most people their knowledge of song meanings and their beginnings tend to come from interviews in which such questions are directly asked to a band; but Tirikilatops say that’s a little different in Korea.

“The first time we played in Korea I didn’t know what was going on. I was waiting to start the song, but Bom carried on talking.” Bom explains that this is completely normal in Korea, artists will talk to their audience a lot between songs, it is something the audience enjoys, and helps the artists gauge how much their crowd is enjoying the show. This is completely normal to Bom who feels “It is rude to play songs and not find out if they like it”, though still alien to UK born SB who laughs “What do you do if they don’t like it?”, suggesting they’d just have to stop playing and leave.

As Tirikilatops head out to South Korea once again this month SB’s probably going to have to get used to those long speeches between their songs! Tirikilatops have gigs booked in South Korea and Japan, including a spot at Hongdae’s Zandari Festa, as announced in the festival’s second line-up reveal this week.

To call Tirikilatops creative might be an understatement. All of the costumes, artwork, gig posters, and band advertising is created by the group via BomiLito. They’re also behind Blackpool’s Other Worlds Festival!

If you’re in Seoul (or Tokyo) over the next couple of months don’t miss a chance to see Tirikilatops play – even if you leave with just that first impression that they are peculiar you are bound to be talking about them for days.

Click below to find the group on Social Media, give them a follow on your preferred site to keep up to date with their music (they’re about to drop a music video that is bound to be tonnes of fun) and their upcoming music and art shows in Asia.