One group that always catches the attention of this MV dissector is VIXX, and their latest teaser, 2016 CONCEPTION Art Film, is no different.

So here goes, all the little references packed into this teaser, that might come into play in their full up-coming concept: 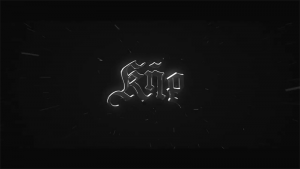 Κῆρ refers to the Keres of Greek Mythology. Keres were female death spirits. The Keres were the daughters of Nyx (the Goddess of the Night). Also knows as the Sisters of the Fates, or the Moirai, Atropos, Clotho and Lachesis are described in the Shield of Heracles as follows:

The black Dooms gnashing their white teeth, grim-eyed, fierce, bloody, terrifying fought over the men who were dying for they were all longing to drink dark blood. As soon as they caught a man who had fallen or one newly wounded, one of them clasped her great claws around him and his soul went down to Hades, to chilly Tartarus. And when they had satisfied their hearts with human blood, they would throw that one behind them and rush back again into the battle and the tumult.

Just through the meaning behind the title we can unlock a little more of the imagery really quickly. The Ancient Greek origins of the Keres certainly does run through the entirety of the teaser, and we’ll look into that more.
But also the number of Keres, three, becomes extremely prominent – we later see three figures appear together. Throughout history, almost regardless of the culture being observed, the number three holds extreme importance and is present in religion, architecture, mathematics, even the make up of humanity.

It is interesting to note that whether an EP or full album this would be the third of either to come from VIXX.

The destiny of gods and men is, according to myth, controlled by the Three Fates; and cultures across the world have long believed that the number three represents something mystical and divine.
Notably in the sixth century BC, Greek mathematician and philosopher Pythagoras introduced his famous theorem: a2 + b2 = c2.
Pythagoras, and many ancient philosophers, saw mathematics as a way to explain the supernatural. Pythagoras taught that everything in the universe has a three-part structure, and every problem in the universe could be reduced to a triangle, and the number three.

Importantly, Pythagoras was not wrong, all living organisms are dependent on three types of molecules to function (DNA, RNA, and proteins); and the scientific breakthrough that deciphered the Genetic Code discovered that the elements in the structure of DNA are made up in groups of threes. 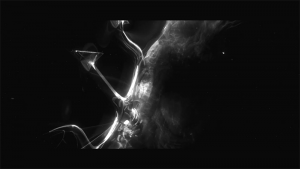 Wielded by Poseidon the Trident is one of the most powerful of symbols related to Greek gods (much like Zeus’ lightning bolt). Again showing prominence of the number three, the three fork of the trident are said to represent the three properties of water: liquidity, fecundity (being a vital component in natures fertility), and drinkability.

Poseidon was also notably one of the three sons of Kronos. When Kronos was defeated he divided the world into three, and allowed each son to rule over one kingdom; Zeus was given the sky, Hades the underworld, and Poseidon the sea – the Earth and Mount Olympus belonging to the three collectively. 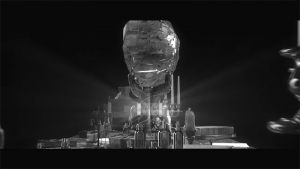 Alchemy was extremely prevalent throughout ancient Greek civilisation.
Now the names most likely to be associated with the practice are Nicholas Flamel and Sir Isaac Newton.
Nicholas Flamel was said to have discovered the Philosopher’s Stone and achieved immortality (many parts of Harry Potter are based on real history), though this isn’t actually true, Flamel was a scribe, and died in 1418 – it wasn’t until the 17th century that such accounts appeared.

Famous scientist Isaac Newton, known for introducing the three laws of motion – the basis of all modern physics – was extremely interested in alchemy. Newton possessed something called ‘The Emerald Tablet’, an ancient document that is said to contain the entire knowledge of the universe. The document lays heavy importance on the number three, and its involvement in connecting the universe and cosmos.
It is said that the person who can obtain and unlock the knowledge within The Emerald Tablet would become the master of Life, Death, and the Supernatural – much like possession of the Philosopher’s Stone. 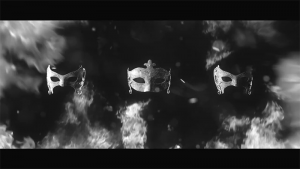 In three once more we can see these as representation of the three masks of Greek Theatre, or as three deities. The Three Fates perhaps? 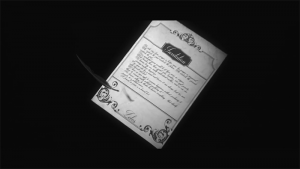 The invitation we see bears a signature at the bottom, it is signed Zelos. Zelos, or Zelus, was a winged enforcers of fate who stood in attendance at Zeus’ throne. He is known as the spirit, or god, of eager rivalry and zeal. 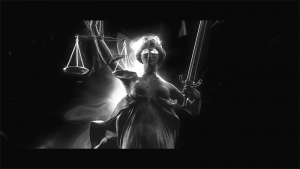 The Greek goddess of Justice is a role portrayed by both Dike (the daughter of Zeus) and her mother Themis. They are depicted as carrying balance scales, though it is the Roman counterpart Justitia who appears blind-folded.

Myth says that Themis and Dike executed the law of judgement and sentencing, and together carried out the final punishments decided by the Moirai (or Keres).
The image of Lady Justice you will see in many places of law is often a depiction of one, or an amalgamation of, these women.

This teaser from Vixx shows the themes of the iliad, the battle song of the Trojan War.

So what does this all revolve around?

Fate. Conception is fate; the Keres are the sisters of Fate; the destinies of gods and men are controlled by the Three Fates; the ending of the iliad being decided by fate. This is the consistent theme of the VIXX Conception Art Film.

Given their past offerings (Hyde, Voodoo Doll, Error) this will no doubt be another dark concept from the group – and one that shouldn’t disappoint.