VIXX are set to release the repackage of hyde at the end of the month and they’ve released the teasers for the album Jekyll, and the cryptic teaser for the title track You’re Impressive. 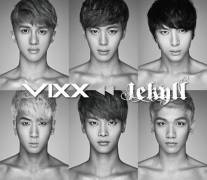 In comparison to some of the hyde teaser images Jekyll has the members stripped back to basics, in the physical sense of the word, their severely flexed shoulders and trapezius muscles on show. Jekyll however is even more basic than hyde.

The VIXX members lack the dramatic make up that hyde has them in, and this shows them in their regular human state before the evil of their alter ego hyde takes over them.

This takes us to the You’re Impressive teaser, which is in reverse.

The teaser has an excess of white, emphasising the purity and good in Jekyll. You’ll notice that as everyone is moving in reverse Ravi never does so. He rides a bicycle through the scene in a forward motion and towards the end he smashes the tv. This is followed by the room’s hue darkening and the hyde video coming into view on another tv screen as all of the members fall to the ground. Ravi is a reminder of the influence of the evil that was present in Jekyll and could take over him at any moment.

It will be interesting to see if the You’re Impressive mv leads into hyde to keep up the reminder that Jekyll always had evil in him and was trying to suppress it until he accidentally set Hyde free with his experimental potion.

The repackage and mv release on the 31st so there isn’t long to wait to find out.